My interpretation of technique from this article for Panda3D FilterManager.
The advantage of this approach is that any bright objects in the scene would create a lens flare without any special configuration of the scene. 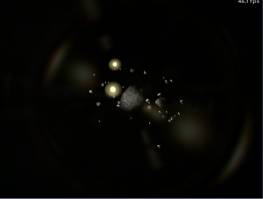 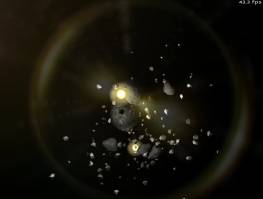 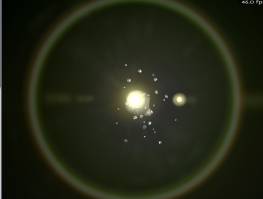 Looks cool, unfortunately on a Radeon HD 3850 I got a pink screen and

Now it works…and I must say it looks SPECTACULAR! Good job!

Thanks ) Of course you can use it )

ADD: I fixed shader in the sample archive

ADD2: ATI video cards (or drivers) are not too frendly with the input variables, so I had to transfer most of parameters to the shader code. Archive updated.

Woah! Man, this is one of the best looking things I’ve seen in Panda in 2012! Really, the effect is amazing and it runs perfectly smooth on my Intel GMA 4500 (your initial package, not the modified version; didn’t try that).

Keep up the great work!
You make me want using Panda again.

Thanks. Nice to hear it )

This looks like a very nice filter. I was preliminarily discussing with rdb the possibility of integrating it into CommonFilters.py in Panda.

What is the license for your code, and would you mind if this filter was made part of a basic install of Panda?

In case it’s ok, I can do the integration work, unless you specifically want to do it yourself. Using a similar approach as for the other filters, it would be possible to expose the compile-time parameters to the user, as CommonFilters already has the infrastructure to regenerate the filter code when certain parts of its configuration change.

(Note that there will probably be some changes to CommonFilters.py from my cartoon shader patch; e.g. the new version automatically numbers the TEXCOORDn semantics requested by the filters. Integration should be easier with the new version.)

Sure. I would be glad if this filter became the part of the Panda.
About license - I think something like WTFPL or Public Domain.

Sure. I would be glad if this filter became the part of the Panda.
About license - I think something like WTFPL or Public Domain.

Ok. I’ll integrate it. Thanks!

I now have an initial integrated version ready. It was pretty straightforward. Thanks ninth!

The way I did the integration depends on some of the changes to CommonFilters in my cartoon shader patch, so likely that one will have to be processed first.

I made a new thread, in which I’ll post about any updates to the situation:

CommonFilters - some new filters, and the future Panda Features in Development

Hi all, I’ve been extending my copy of CommonFilters and will be submitting it for consideration for 1.9.0 soon. Current new functionality Lens flare based on the algorithm by John Chapman. The credit goes to ninth (https://discourse.panda3d.org/t/lens-flare-postprocess-filter/13047/1); I’ve just cleaned up the code a bit and made it to work together with CommonFilters. Desaturation (monochrome) filter with perceptual weighting, and configurable strength, tinting and hue bandpass. Original. S…