this may be better in another thread

Perhaps I could have created a new thread, but as for current threads, there aren’t many that discuss @redeyedman’s new 2.8 exporter.

However, we’ll need a bit more info on how the file fails to export

So, by failing to export, I mean that when it exports, it has a file size of 28 KBs. Basically, it doesnt export. If you try to view this with pview, it shows a grey screen and the terminal reads:
:egg2pg(error): Error reading perfectbox.egg

This basic model is comprised of just cubes, with colors applied to the walls and floors from Blender. There is no texture file for the YABEE export to use since there are no textures on the model itself.

I imagine it would since I do not recall this part of the API changing between 2.7x and 2.8.

Hm, I am really not sure why my friend was saying it was failing to export if there were rigged objects. I will have to get more details on that

Does YABEE require selecting the objects to export? And, if so, are you doing that?

Does YABEE require selecting the objects to export?

I don’t know whether it’s been changed in this version, but the older (i.e. Blende 2.7) version of YABEE does indeed require that anything to be exported (including armatures) be selected when exporting, I do believe.

So, I have tried multiple ways of selecting the box in order to export it. When I successfully exported character models, all I had to do was Select > Select all by type > Mesh. For this box, I have tried all types of selections, from taking my cursor and dragging the selection over the entire box, individually clicking on each element of the model, and doing Select > All. In all three instances, the export had either 28 KBs or less and failed to show in pview.

I am still thinking that it’s because there is no tex file to reference during the export. It may be that colors in blender do not export unless they reference an outside texture file in .jpg or .png. But, it could always be that I am screwing up something simple.

Possibly, indeed: do you have “force export vertex colors” checked? (Presuming that the same box still exists in the new version of YABEE.)

Hmm, I was not checking that box. I just did that, but it’s still only exporting with 21 KB, so no luck.

Very odd. Using the old version, I can definitely export a simple cube with vertex-colours, using only that version’s default settings plus “force export vertex colors”, I believe. (No texture applied, nor material.)

[edit] That said, I gather that the new version uses Blender’s shader system–perhaps the problem lies in your shader-nodes?

I do not really know much about the shader system nor shader nodes.

I attached the simple box that I am trying to work with if that helps at all. Maybe its something with the model itself.

I don’t have Blender 2.8 myself (I’m sticking with 2.7 for now, I intend), so I’m not currently in a position to examine the model, I fear. Hopefully someone else here has 2.8 installed, however!

That’s totally understandable, thank you though!

YABEE for Blender 2.8 does support exporting rigged models in the same way as old YABEE does.

YABEE -- Renewed Egg exporter for Blender 2.8. Contribute to kergalym/YABEE development by creating an account on GitHub.

Feel free to update your forks. YABEE 15.3 export capabilities has been improved.

Contribute to kergalym/PRPEE development by creating an account on GitHub.

YABEE 2.8 which supports Blender 2.8 and RenderPipeline only now is renamed to PRPEE to be more distinguish from original YABEE as @rdb asked me.

Sorry for new logo if it looks rough for someone, I’m not best in making logos in Krita xD

EDIT: What does PRPEE stand for?

It stands for Panda3D and RenderPipeline EGG format Exporter. Sorry for long answer.

It should work for 2.91 but not tested yet, there could be same Blender API changes… 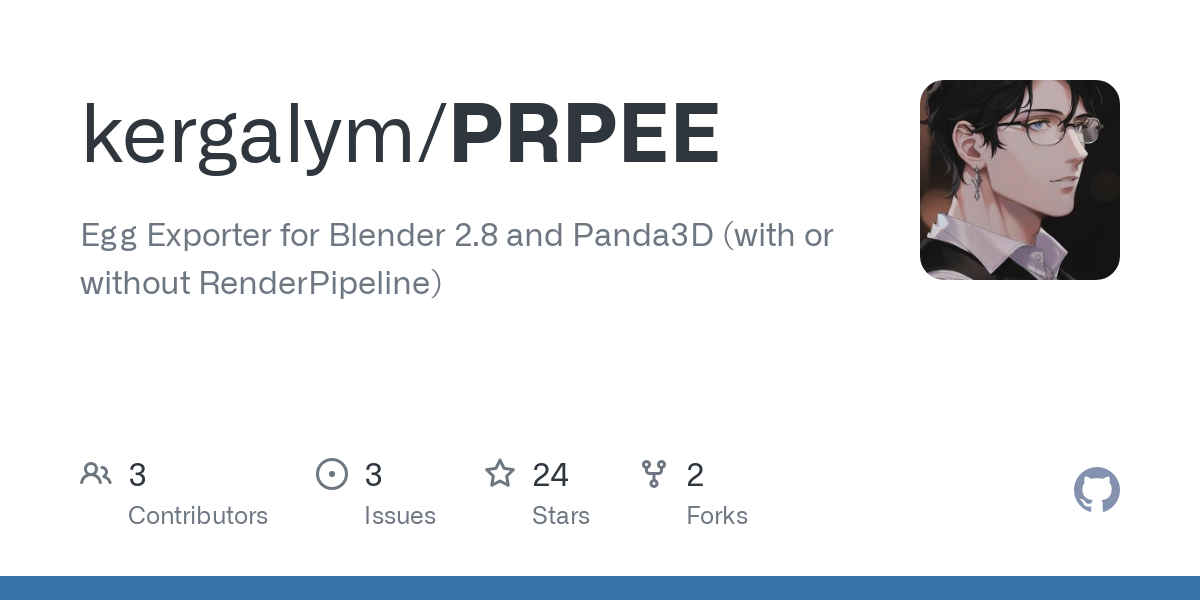