I’ve been trying to install the Panda3d runtime, but it doesn’t work.

I’ve followed the steps in the webpage, but nothing, even after restart my computer.

The page show the message:

Warning
The Panda3D plugin does not appear to be installed! You will need it in order to run the demos.
Please follow this link to download it.

After that, I’ve tested the Google Chrome browser, and it works !! so I think that the problem is with firefox.

Does anyone else have the same problem? What I need to do to fix it?

This problem is not really an emergency, since i have the plugin working on Chrome, but it would be nice to have it working on Firefox!

NOTE: I have a partition with windows with Firefox 11 too!, and it works fine there! so I have no clue about this problem

Is the plugin listed when you type “about:plugins” into the address bar?

No, it’s not listed. But, if the plugin works on Chrome, why doesn’t work on Firefox.

since this is the only way to install it; if I add the repositories synaptic gets a little crazy, and don’t let me install it. Taking in count that the plugin works just fine in Chrome, I suppose that the installation is correct

EDIT: I have to add, that I’ve installed the plugin using dpkg in the terminal, and nothing strange happened, the same with the ubuntu deb installer.

Odd. You did try restarting Firefox after installing the plugin, right?

Hmm, perhaps somehow the plugin is installed to a directory where Firefox doesn’t look for plugins… can you find out which directory Firefox plugins are usually installed to on your system, by checking the paths of the other plugins in about:plugins?

I can’t find the installation path in about:plugins. And after some research in google, I’ve found that the typical directory paths for plugins are:

but I can’t find anything panda3d-related in there neither.

I think that the problem should dissapear with the next ubuntu version (the 12.04), so meanwhile I can use Chrome for some web-embedded testing, since looks like nobody else have this problem. What do you think?

Anyway, it would be nice to solve this problem for future reference

Do any of these files exist?

None of those files exist on my pc.

EDIT: Also, I don’t have any “mozilla-firefox” folder in my /usr/lib folder.

Sorry, my bad, do these files exist?

So yes, the plugins is correctly installed i suppose

This is a screenshot of my firefox with the ball-in-maze demo: 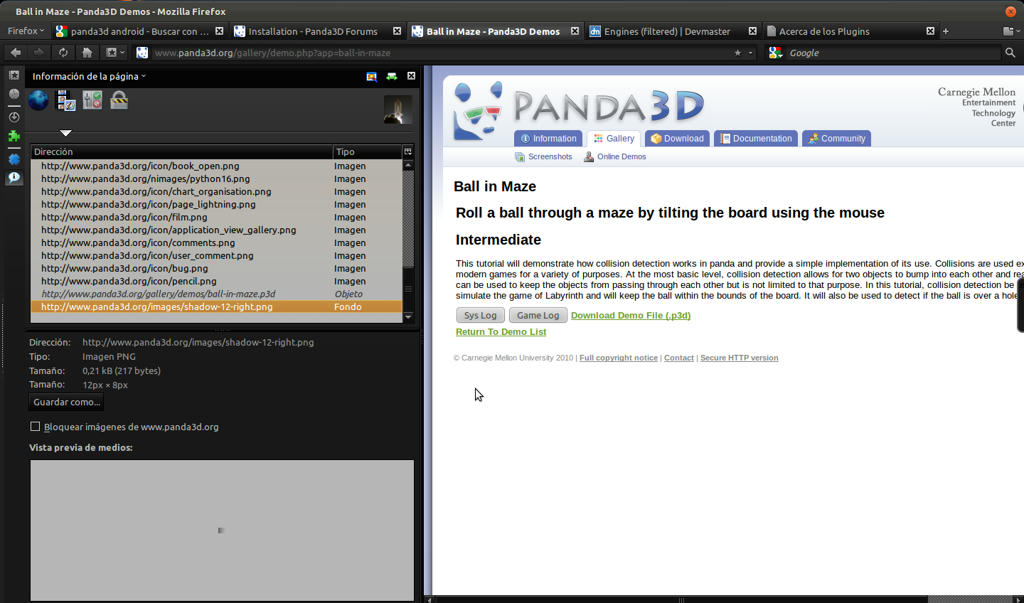 Hope this was useful in some way…

Hmm, perhaps your version of FireFox is not looking in those locations… can you try copying nppanda3d.so to a location where you can find other plugins that are loaded correctly?

The plugin works just fine now!! Thank you so much!!

The only thing to fix was the location of those files, I’ve copy the “nppanda3d.so” to:

and then everything was just fine

Thank you again for the help!!

BTW: Is there a reason why this have happened to me? or is just another random problem that appears from time to time??

Does your version of FireFox come from the Ubuntu repositories?

Yep, it’s the default Firefox that comes with Ubuntu.

Oh, btw, I’m running gnome-shell, not the default unity; I don’t know if that is relevant. . .

EDIT: Another fact; the plugin was installed after the change from unity to gnome-shell.