how to force exporting control joints in chicken

I am playing with the fleur model from chicken example.

I find that only the joints that are related to an exported animation is exported to the egg file by chicken.

Is there a way to export all the defined joints in the model to the egg ? I would like to manipulate the neck and egg by a program instead of in an animation.

There is no way to do it I’m afraid. It would make no sense to do so either - Panda does not support the constraints used by control bones and so Chicken doesn’t support them. No way that is going to change either - the idea of constraint bones etc only makes sense for making an animation - Panda just cares about playback. If you want to do all of that you will need to code it yourself, and a constraint solver for bones is not a simple thing to implement.

I just want simple manipulation on the joints defined in blender.

I get this joint by defining a dummy animation keyframe and export this animation. I actually just want to rotate the head with this joint, as shown here youtube.com/watch?v=N_kc7G2ra8Y

I am new to modeling. Is it possible to export this joint by chicken directly instead of defining a dummy animation ?

All bones that affect the mesh in any way, i.e. are used by at least one vertex, should be exported, regardless of if any animations use them or not. The mesh plus bones export does not consider the animations at all, and certainly doesn’t prune bones for being unused by any animations. Its only bones that do not influence the mesh but influence other bones via constraints that aren’t exported. The stuff in http://panda3d.org/manual/index.php/Controlling_a_Joint_Procedurally should work fine as long as the bone is actually used directly.

Thank you for the explanation.

How about this example, the bone that connect to the chin and I can’t find it in the .egg file unless I add a dummy animation: 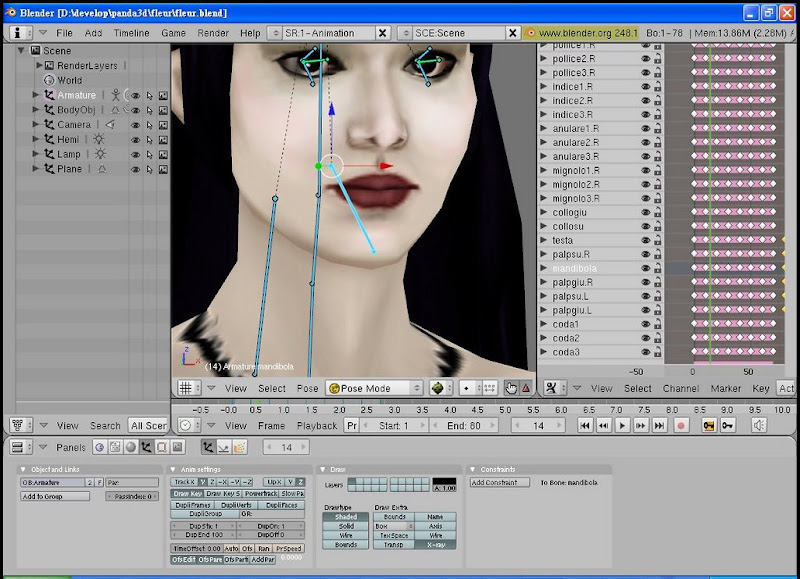 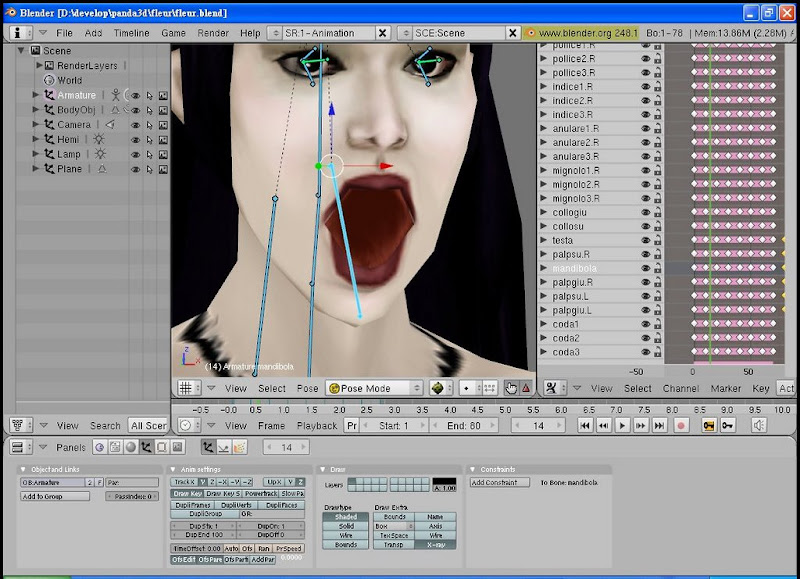 Did I miss some steps ?

I’ve never looked too closely at that example mesh, but I expect that the bone in question is controlling other bones and then those bones control the mesh. Its those bones that you would have to use to control the chin. Ill have a proper look this evening - at work so can’t look right now.

This is an interesting problem to know about if it is true because I do that sort of thing a lot (ie. having bones that aren’t animated in advance but are intended to be moved in code) so thanks for pointing out this issue to watch out for.

That said, if the workaround of having a dummy animation on the bone works fine, then why not simply do that?

I figure out the dummy node method after I asked the question. Also, I am considering to use some very complicated models that may have many bones to make in the dummy.

Not sure what your refering to in that last post but just had a look at the model - that chin bone is exporting fine, and should be quite controlable. As far as I can tell all behaviour is as expected. Feel free to correct me if I’m wrong, but i don’t see anything wrong.

That’s strange. I can’t find that chin joint in the egg file. May be it is my problem only. Thank you very much for looking into it. I will try other models to see how is it happening in this case.