Does panda3d.org need a new layout?

Treeform, your layout looks very nice. Much better than the current one!
But perhaps the “Panda3D” text in the header could use a slight gradient, or border or so.

lol making stuff after your bed time makes spelling mistakes … oh wait i make them all the time!

also current logo is this?

i propose we replace it with this :

oh and here is the icon file for it http://www.freewebtown.com/eiforall/panda3d/panda.ico
well so that file system looks like this :

I think part of our problem here is that pandas are cute and cuddly, and nobody wants a cute cuddly 3D engine.

they can be agressive…from wikipedai “Though giant pandas are often assumed docile because of their cuteness, they have been known to attack humans, presumably out of irritation rather than predatory behavior. Research shows that in cases in which its offspring may be under threat, the panda can and often will react violently” 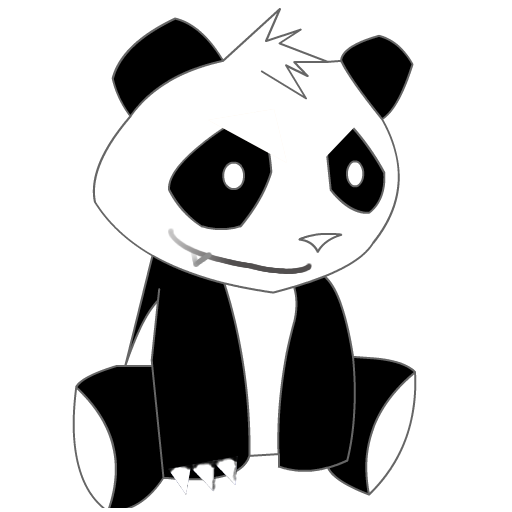 heh that is actually is better! LBarret, good job!

I will redraw my panda to match yours next time i am in windows.

what about this logo?

site needs a redesign should we all submit designs and see which is better?

I like it better with the tooth and mouth looks more mischievous and lively.

Its simple design makes it nice and easy to recognize at small sizes and that also helps.

what about this logo?

site needs a redesign should we all submit designs and see which is better?

make some thing better common! some thing worthy of this engine the current site is crap.

woulda done a 3d render but it sucked

sure it looks like someone got shot over it…

what do you guys think?

No, I like the one with the teeth better

This one looks too cute too.

tell me what you like and what you dont i will try to incorporate that into design, also here is the GIMP source treeform.p3dp.com/pandasite/p2d.xcf - play with it

The jungle in the banner doesn’t look all that bad - no a bad decission.

Things I would dislike:

But thanks for the suggestions.
Dunno how far the design works inside of ETC did grow… (Josh?)

The text in the upper left box can be changed but it should be something snappy to grab the attention of users, something that tells them right at the start the benefits of using Panda.

The image viewer at the left of this auto scrolls to show more screenshots, the buttons probably ought to be smaller.

Can we please have an actual community wiki? It could make the life of new users much easier by having any code/how-to that is posted on the forum being easily available in one page. It might even supersede the official manual.

Uh, ignore the suck of the download button, it’s just a placeholder to show how it would be placed to grab the attention of users.

The content ought to be stretched all the way or another column should be put on the right to fill the empty space. No idea what though, I don’t quite like the idea of having the three random screenshots again.

Originally I had Bell Gothic as the font and I was kinda despairing because it looked good but all I had were non-commercial trial versions of the font. Then I found Florida Project and besides looking great, it ties into the history of Panda quite neatly!

Anyway, alternate version of the logo. It reads better but is less interesting than the one I’m using in the mockups.

These are mockups based on the current design, I’ll try doing another one with a different direction.

Also, treeform’s panda is the win but It was kinda anglular for my taste so I retraced it.