For some reason, any model I make ends up looking like it’s textures have been warped by Panda3D. The textures are powers-of-two sized. My models follow the following ‘production line’:

can you provide sample files and if possible a screenshot of how it is supposed to look?
if it looks warped and you are using powerof2 textures. then the uv-coordinates most likely got screwed up.

Here are the screenshots:

EDIT: IMG tags were not working, changed them to links

Here are the screenshots:

First. You’ve chosen a bad texture mode, you need to set other one.

As soon as I’ll have time I’ll post you the code.

, you didn’t combine the textures…

Put everything into one texture, and it will be OK. (Of course if there is nothing wrong with the model.) 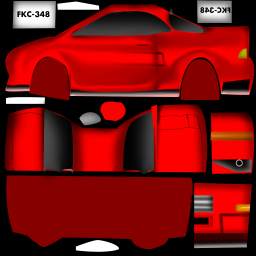 MentalDisaster: this has nothing to do with texturemodes or combining textures into a single image. once again do not post wrong information! (remember last week!!)

the reason why it looks warped is cause the the UV-coords are messed up. i dont know exactly what caused this , especially since half of the model is ok. either there is a bug in sketup exportin to wrl or the panda-loader is broken.

if i try to load the wrl directly in pview i get TONS of errors like this:

from the visuals and the console output during load-time it looks like especially tri-fans are not handled correctly when panda reads the file.

about the model itself (has nothing to do with the wired texture warping): it looks like you used boolean operations to create the model from a number of primitives. this works but it causes an highly tesselated mesh with lots of unnecessary triangles. your model also has an “inside” and an “outside” shape.
you don’t need the inside one since its never visible anyway.

If you’re using sketchup I recommend exporting it to collada (.dae) and then using dae2egg.

MentalDisaster: this has nothing to do with texturemodes or combining textures into a single image. once again do not post wrong information! (remember last week!!)

I had almost exactly the same problem, and when I combined the textures it did disappear like he never existed.

I tried to export xbox’s model on my own:
.skp>.lwo>*.egg

If you’re using sketchup I recommend exporting it to collada (.dae) and then using dae2egg.

To do this with the free version:

Export as a Google Earth model(.kmz).

If you unzip the kmz file there’s a Collada file inside that contains all the model data.

Thanks for the quick replies, everyone!

As for the abovementioned dae2egg, I have Panda version 1.5.4.

If I transferred to 1.6.1, would it be compatible with my code?

Possibly. No reason not to try it - you can always downgrade.